“Tarzan” and “Jane” and I can’t get enough of “Cutthroat Kitchen.”  It’s a show on the Food Network where the chefs compete against each other and try to derail one another with sabotages. On last night’s episode, for example, one chef had to do all her food prep in a La-Z-Boy recliner.  I love the idea behind the show: Can you succeed no matter what’s thrown at you?  I believe so, although sometimes you have to redefine your definition of “success.”

A few weeks ago I started to run the California International Marathon but I didn’t finish.  Like those crazy cooks on “Cutthroat Kitchen,” I, too, was handed sabotage on race day — Tarzan’s (my son’s) stomach bug. He was sick on Monday; my husband got it Thursday; and it hit me inconveniently Sunday in Sacramento.  I almost never stop for Porta Potties during races but by Mile 8, I knew I was in trouble.  I was in pain and the potty line at the Mile 8 aid station practically stretched back to San Francisco!

I’m not sure how I held it together between miles 8 and 9, but I did. During that time I frantically searched for anywhere discreet to pull off.  Just after mile 9 I spotted a gas station and I made a dash for it.  I won’t go into the details but let’s just say nothing good ever happens or ends in a gas station bathroom.

Clammy, green and sick, I faced a hard choice in that dirty, smelly stall: Should I keep going, knowing that my race goal was slipping and I would likely get sicker by the mile, or should I stop in hopes of salvaging the bigger picture?  I choose the latter.  Disappointment does not begin to define my feelings at that moment or even now.  I had kicked butt in training but now bad luck had kicked me back.

I’ve trained for and run many races and I’ve learned this: You can train hard and plan well, and yet there are still two things that can “sabotage” your race day goals: 1) The weather; and 2) Injury or sickness.  I won’t dwell on happened to me at CIM.  I’ll simply chalk it up to experience and move on. I read a quotation by Jilliam Michaels recently that said something like, “a bad day for the ego is often a good day for the soul.”  That is how I am treating my lost race goals in Sacramento. I still made it to Mile 9 under bad circumstances.

I mentioned earlier that sometimes you have to redefine success for yourself so here’s my truth now.  I’m in my late 40s and for the past several months I’ve been running 50-55 miles a week consistently and hitting my interim goals extremely well along the way. To me, that is a measure of success no one or no thing or circumstance can take away from me. Dec. 7, 2014, just wasn’t “my day” but today and tomorrow will be.  There will be more races and successes for me in my future.

Right before I ran CIM someone who’s coached me recently and who I consider a good friend gave me this sound advice: Be fierce and go after what you love and want in this crazy world.  I have thought about those words a lot in the last few weeks and here’s more of my truth. I’m going to go back to writing about the things I like and what I hope inspires you, too — the everyday trials and tribulations most of us face in training, running, parenting and in life. I’ll also return to writing profiles about other midlife marathoners who’ve qualified for Boston before like me.

My goal for 2015 is finding and protecting my fierce, whether it’s in running, in writing or in life. I can assure you, nothing, not even a stomach bug, will sabotage my success in doing so in the long run.  Sometimes, whether it’s in “Cutthroat Kitchen” or in life you have to be fierce, but not to please others, but because the fire and passion resides within you.

“Aging is inevitable but growing old is a choice. Lace you your shoes and let’s go!” 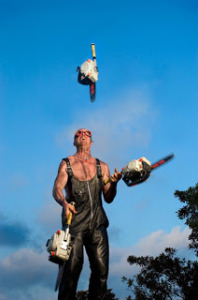 Do you ever feel like you’re juggling chainsaws? Got so much going on you’re afraid of slipping up? I know the feeling …

Sunday is The California International Marathon.  I’m also a week away from completing my first semester in graduate school.  It’s gone fast and now it’s time to get my marathon on. Woo-hoo!

My last day of class will be two days after I get back from Sacramento.  I have two papers due between now and then.  (That’s why you haven’t been hearing from me lately.)

A lot has changed for me since December 2009 — the first time I ran CIM and qualified for Boston. My kids were ages 7 and 3; I just hit my 40s; and I was a full-time mom/part-time professional writer. Today, I’m a grad student; “Tarzan” and “Jane” are 8 and 12; and I’m five years older, which my body reminds me of more than I like. 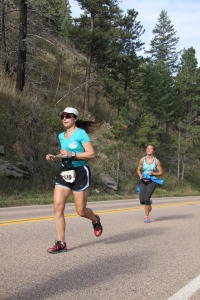 I have never been one to shrink away from challenges — hence my chainsaw metaphor.  I believe as we grow older we’re often called upon to evolve.  Sometimes changes are thrust upon us and other times we choose them.  After all, what choices do we really have? We can’t go backward, even if we want to, so forward we go. It’s either that or stay put.  I’ve chosen my current path and I have no regrets.

It’s not easy “juggling chainsaws”: Training for marathons, raising your kids and changing careers in midlife but so far I haven’t caught an edge.  I consider that a success and it makes me happy.

I’ve also made this decision: I plan to take a break from marathon racing while I finish out the rest of grad school, which is two more semesters (spring and fall).  I would like to focus on shorter distances and speed during that time. I will begin student teaching two days a week, plus take four classes, starting in January.  My last semester will include full-time student teaching.  Even though I hope to BQ again at CIM this Sunday, I think my life will get even crazier in the coming months.  I’m grateful that the grad program I’m in has been gradual before throwing us into the classroom. I can’t imagine what it would have been like for me and my family otherwise. Perhaps like juggling chainsaws one-handed?

Once I’m in the classroom I think it’ll be a marathon of its own until I get my teacher’s legs steady beneath me. That’s why I’m creating this break for myself.  I also can’t lie.  I love running short, fast and hard — and I’m better at it, too. I’m looking forward to switching gears and I think it’ll help me keep my sanity during the interim.

If you want to follow my progress on Sunday here’s a link to the.CIM athlete tracker.  Please send me positive vibes.

I hear the chainsaws buzzing and I have to write those papers so I’m signing off now.  I’ll let you know how Sunday goes.  Keep those hands steady and my mind focused  I can do this. 🙂